The new book is here - "Chronicle of a Myth II" 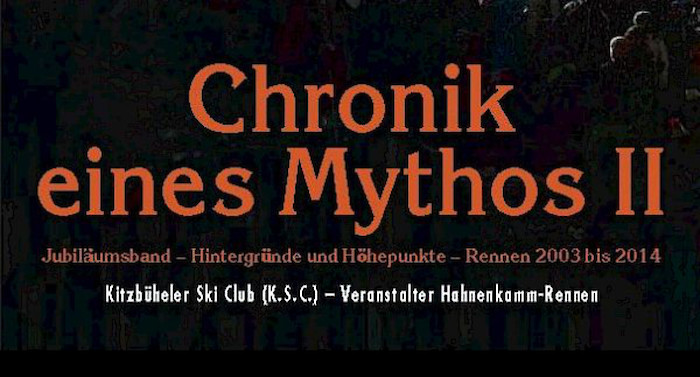 THE NEW BOOK IS HERE

„CHRONICLE OF A MYTH II“

Finally. The Hahnenkamm Chronicle has been brought up to date.

„Chronicle of a Myth II“ is now available from K.S.C. This book tells the story of the Hahnenkamm Races in chronological order from 2003 to 2015 in German and English. It also includes many topics that were not covered in the first edition.

A great present for ski fans, family, friends and visitors!

It is more than a written description of an annual sporting event. Tens of thousands of sports fans are mesmerized by the Hahnenkamm Races every year. It is more than a chronological listing of past and present sporting achievements, collection of anecdotes and annual particularities. The second edition also documents the Hahnenkamm Races and focusses on the events from 2003 to 2015 – with a detailed expose of the individual disciplines.

Triumphs and tragedies occur year after year at the Hahnenkamm Races, where the international ski elite, well-known personalities from all walks of public life and many thousands of fans meet annually to share in this great sporting adventure with their ski idols. The story of the Hahnenkamm Races is continued in the „Chronicle of a Myth II“. Many aspects and details on the races, their organization, technology and the race courses are included that were only briefly mentioned in the first book „Chronicle of a Myth“ (published 2002), or have since developed into new traditions: each of the 75 Hahnenkamm Races from 1931 to 2015 is a milestone in ski history.

In celebration of the 100th anniversary of Kitzbühel Ski Club (K.S.C.), „Chronicle of a Myth“ was published in December 2002. The 100 year history of the K.S.C. was recorded in the first edition. Interesting stories, such as Kitzbühel’s application to host the Alpine Ski World Cup in 1970 or the start at Steinbergkogel, can be found in the 241-page compendium, as well as an abundance of well-prepared statistics. Rolls of honour for winners and runners-up as well as stunning photos from previous years and images from the races up to 2002 make the „Chronicle of a Myth“ an indispensable reference tool that should be on everyone’s bookshelf. The book was awarded with the “ULLR Award” in the USA in 2011.

Combined package „Chronicle of a Myth Edition 1 and Edition 2