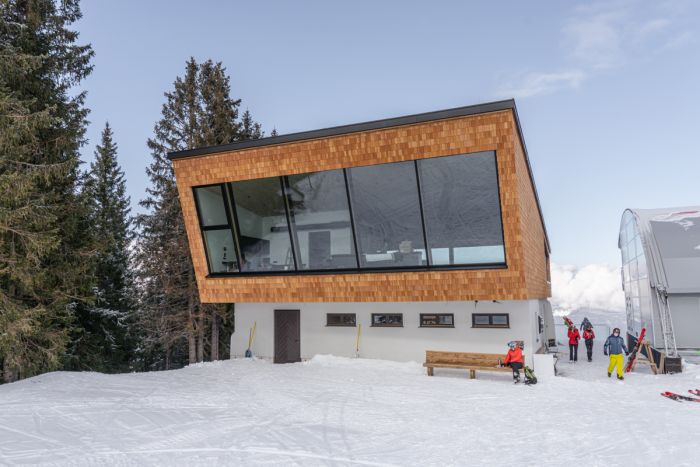 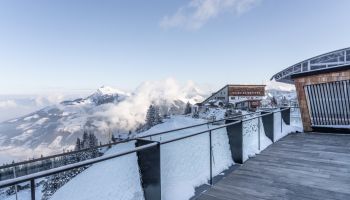 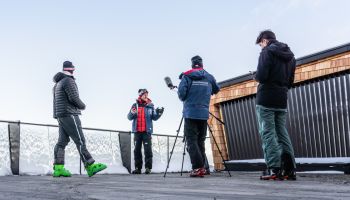 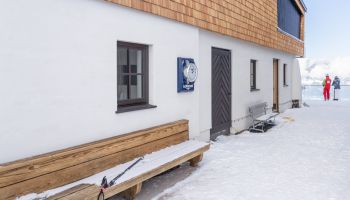 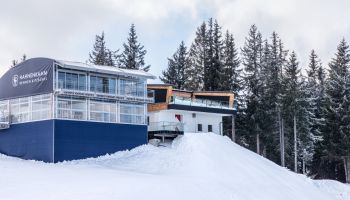 Just in time for the 75th anniversary of its first use, the legendary Start House on the Hahnenkamm has been renovated and extended. Floor space has remained the same, but an extra storey has been added.

The Start House on Hahnenkamm is just as integral to the Hahnenkamm Races as the “Mausefalle, Hausbergkante or Zielsprung” racecourse sections. Above all, the view from the start room over the Streif commands the respect of even the greatest heroes. After 74 years, however, the building no longer met the demands required of it. During Race Week especially, the toilets and wet rooms had reached the limits of their capacity. So, in August 2020, reconstruction work began on what originally started out as a storage hut.

“By generously expanding the sanitary area, we obviously lost space, which is how the idea of adding an extra storey arose," says KSC General Secretary Jan Überall, revealing an insight into the development process. "Our philosophy has always been that the foundation walls of the old Start House should remain intact. Areas that have remained unchanged in the lower area include the start and warm-up room, as well as a small lounge for meetings," says Jan Überall.

In future, its impressive attributes will not only include the view down to the Mausefalle, but also a large room on the first floor: flooded with natural light, thanks to a glazed front facing Mount Steinbergkogel, the future event room - opposite Kitzbüheler Horn and the Wilder Kaiser Mountains - merges into a beautiful terrace. "This is where club events, such as the gondola presentation ceremony for Hahnenkamm winners will take place," says Jan Überall, looking ahead to the coming summer. At the same time, the new Start House will also be made accessible to the public: as part of the 750th anniversary celebrations of Kitzbühel receiving town status, it will host a medal exhibition of KSC legends from mid-July to early September.

Stylistically, the new Start House is reminiscent of the valley and mountain stations of Hahnenkamm cable car, both of which were designed with a pitched roof by Kitzbühel painter and architect Alfons Walde. KSC President Michael Huber is delighted with the "contemporary interpretation of the pitched roof" by Kitzbühel architect, Michael Egger. It was important to the Ski Club that the new Start House matched the overall look and theme of the Hahnenkamm, relying primarily on “natural materials” (aka wood) for the new construction. “The Start House is a calling card for the Hahnenkamm Races and Kitzbühel”, says Michael Huber, and it should remain that way. The KSC chief is also keen to thank those involved with the build: “Their commitment to the task in hand impressed us all. They worked tirelessly from mid-August to the beginning of Race Week to get everything ready on time."

The history of the legendary Start House goes back to the Second World War, when it served as air force barracks. In the autumn of 1946, KSC finally approached the municipality (as landowner) and asked if the barracks could not be used for peaceful purposes. From then on, it remained a material storage hut for many years, only becoming a start building after regular expansion work in the 1970s - with by far the biggest overhaul taking place in 2020.

Red Bull's "Energy Station", which is traditionally built next to the Start House for the Hahnenkamm Races (always in October), will continue to exist, "because it is still needed of course," emphasises Jan Überall , adding: the Energy Station is a gesture of appreciation towards the athletes. The effort that Red Bull goes to year on year here in building a huge start building especially for the athletes is unique in the World Cup. Just as unique as KSC's new/old Start House.