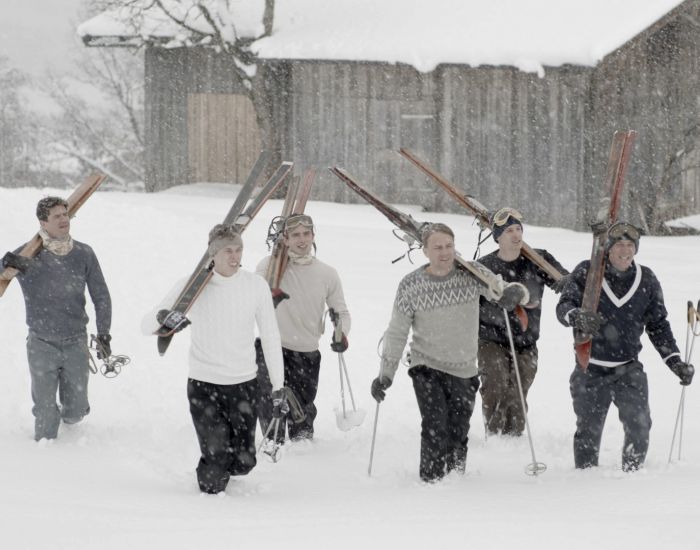 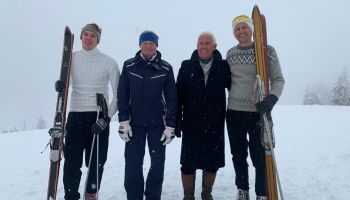 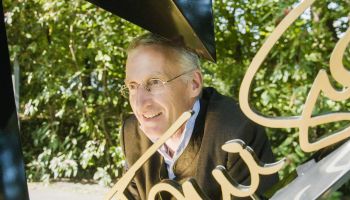 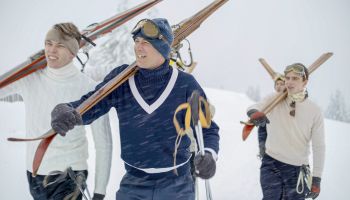 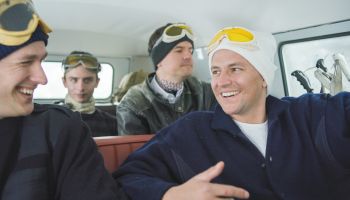 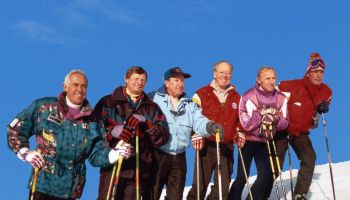 They were six friends from Kitzbühel who dominated the ski scene back in the 1950s. Servus TV is now presenting “Mythos Kitzbühel - The Wonder Team", a new documentary about Toni Sailer, Ernst Hinterseer, Fritz Huber, Hias Leitner, Anderl Molterer and Christian Pravda. Two grandchildren slipped into the role of their grandfathers in the historical scenes.

We find ourselves in Kitzbühel in the mid-1950s. It is deepest winter, bitterly cold and gusts of wind whip snowflakes against the faces of six friends. It's the kind of day when anyone else would snuggle down and get comfy next to the fireplace. But these are no run-of-the-mill boys training here on the Hahnenkamm. A unique troop is (unwittingly) honing their hero status. A slalom course has been set with wooden poles and when the trainer raises his hand at the bottom, the oldest of the bunch is the first to push off. “Start again from the top," can suddenly be heard in the background and the sextet regroups. The scene must be repeated.

We are in fact on the Hahnenkamm in Kitzbühel, but in 2021. Servus TV produced an elaborate documentary about the legendary (Ski) Wonder Team last year. Six local heroes and friends Ernst Hinterseer, Fritz Huber, Hias Leitner, Anderl Molterer, Christian Pravda and Toni Sailer dominated the ski scene in the 1950s, winning 28 medals at major events and becoming the darlings of a crisis-ridden population. They sparked an unprecedented wave of euphoria in the still young Austria and became global media stars and role models, who continued to shape generations after them.

There is "Quite a lot of historical video material and photos from that time. But of course what we don’t have so much of, are the more personal moments between the race footage or big receptions,” says director Sascha Köllnreitner. This is where so-called reenactment scenes are used, in which historical moments are re-enacted as faithfully as possible.

When casting the six roles, the production company AdriaAlpe Media sought men between the ages of 20 and 39 who could ski, and struck lucky with the applicants: With Stefan Hinterseer and Patrick Leitner, not only were two grandsons of the original Wonder Team members Ernst and Hias discovered, but another three ski buffs turned up in the form of Moritz Brandt (as Toni Sailer), Andreas Manzenreiter (as Christian Pravda) and Johannes Koidl (as Anderl Molterer) - all tempered by their experience as racers and/or ski instructors. Fritz Huber was played by amateur skier Christoph Steiner.

Filming the re-enactment scenes lasted three days and took place under both adverse and ideal conditions, because it snowed continuously. Scenes became magical when the real legends appeared on set in the winter wonderland on the Hahnenkamm. All of a sudden, they came into view: Ernst Hinterseer (89) and Hias Leitner (86), who celebrated the anniversary of their 1960 Olympic medals from Squaw Valley in 2020. Hinterseer won gold in the Slalom, Leitner silver. Film director Sascha Köllnreitner used this unique opportunity to create a similar scene: The Wonder Team from back then sets off on a training session with their wooden skis slung over their shoulders and meet Ernst Hinterseer and Hias Leitner along the way. Themselves, so to speak. "We look good," says Ernst when he sees "himself" and his young friends.

The main part of the documentary takes place between the early 1950s and the 1956 Olympic Games in Cortina, where Toni Sailer in particular achieved world fame with three gold medals. “Of course, we also tell stories about their youth and the years that followed. But the main focus is on the time when these guys from Kitzbühel really became a Wonder Team," says director Sascha Köllnreitner. This is the second Kitzbühel documentary for the filmmaker since 2019, when he profiled ski pioneer, Franz Reisch.

For "Mythos Kitzbühel - The Wonder Team" Hubertus von Hohenlohe interviews some of the skiing greats about their success at that time and also lets old friends have their say. Hias Leitner, Ernst Hinterseer and Anderl Molterer (90) - the three living members of the Wunderteam - talk about clashes behind the scenes, the arduous way to the top and why their careers are closely linked to Kitzbühel and the Hahnenkamm.

You can watch the documentary here;
https://www.servustv.com/unterhaltung/v/aa-27dcs9rts1w11/

08.04.2022 16:28
The Streif can still be skied all the way down to the valley, but the Hahnenkamm Race OC took the opportunity for a quick inspection at short notice with FIS Race Director Hannes Trinkl. The plan is...