A poster that tells a story in every language 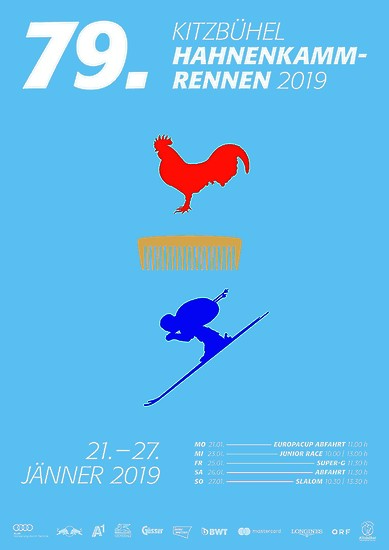 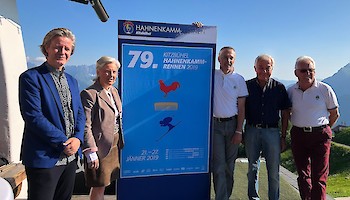 “I wanted to create something atypical, something that catches your eye,” says Riess, who studied graphics and visual communication at Mozarteum University in Salzburg.  The artist also wanted the observer to be able to capture the image’s contents in just one glance. “This picture is intended to represent universal accessibility, i.e. translatable into any language just by looking at it!”

“The use of symbols and pictograms allow the observer to quickly recognise and commit my poster’s image to memory”, explains Riess. Traditional elements, such as a ski racer, cockerel and “comb” representing the Hahnenkamm Mountain are also incorporated into the image. “The intellectual puzzle for the observer is solved on reading the title at the very latest, ” says Thomas Riess.

KSC President and Hahnenkamm Race OC Chairman, Michael Huber, is of the opinion that the athletes and artist share the same objective, “Both have to be creative in solving a problem”. The racer has to find the fastest line; the artist has to come up with a design that immediately attracts the observer’s attention. The creative moment comes into being when familiar content is given a new twist, and this has been achieved in extraordinary style with this poster”. In their role as Organizers of the Hahnenkamm Races, the KSC was able to thank and congratulate the artist during the official presentation.

Thomas Riess was born in 1970 in Tyrol; he lives and works in Vienna

His works have featured in many international exhibitions.

Riess graduated from Mozarteum University in Salzburg in 2001

2017 – AHEAD of the Game at Künstlerhaus Klagenfurt

international awards and pieces represented in many collections