Hinterseer and Leitner: “We went everywhere” 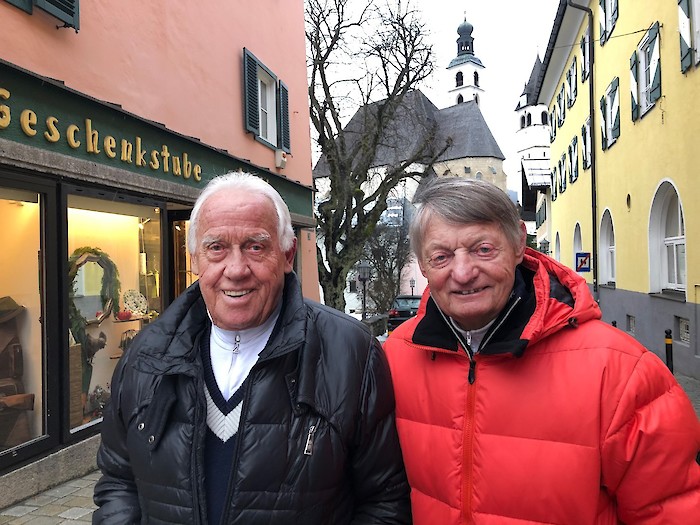 60 years ago, they won Olympic gold, silver and bronze

665 athletes from 30 nations took part in the 1960 Winter Olympics in Squaw Valley in the USA. South Africa celebrated its premiere at the Winter Games, while the Federal Republic of Germany and the GDR appeared as an all-German team. Much of what happened has since been forgotten. But not everything, including the gold and bronze medals won by Ernst Hinterseer and the silver by Hias Leitner. Anderl Molterer was also an active participant.

"I will never forget the trip to Squaw Valley" said Hias Leitner, while Ernst Hinterseer added: "First the three of us, Hias, Anderl and I, met the team at Hotel Sailer in Innsbruck. The next day we took the train to Zurich, from there we flew to London, then to Newfoundland and from there to Montreal and finally to Reno. It's hard to imagine nowadays, but we were on the road for 35 hours with propeller planes". Hias Leitner laughed and said: “We were so surprised at Reno Airport to find gaming machines in the hallway.” We drove from Reno in Nevada to Heavenly Valley at Lake Tahoe for eight days of training. "It was really nice in Heavenly, the training course was relaxed and pleasant, you didn't feel any of the pressure associated with the upcoming Olympic Games", Hias Leitner told us. They all got along well and the three men from Kitzbühel were joined by Karl Schranz, Ernst Oberaigner, Pepi Stiegler and Egon Zimmermann, as well as Gerhard Nennung (substitute).

The Games were wonderful

The team travelled in a small bus for the several hour journey between Reno and their training grounds. Hinterseer and Leitner had to sit in the back, the favourites were allowed to sit up front. They sat with their backs against the direction of travel, which was not particularly comfortable. "Then I said to Hias, maybe it will be different on the way home and we will sit in front", the mischievous Hinterseer recalls.

Both skiing legends agree: “The Games were wonderful, small and intimate. We had nice accommodation and were served an abundance of everything in the dining room. We were made very comfortable, it felt almost like home."

The French were advantaged

The snow in Squaw Valley didn't arrive until early February; a blizzard swept over the stadium at the opening ceremony. The snow was cold and dry, said the two medal winners. “It was a completely different kind of snow to the type we have here in Europe," said Ernst Hinterseer.  "The French had an advantage because of their metal skis with hidden edges. We were still using wooden skis with screwed on edges, which created drag,” said Hias Leitner. Adrien Duvillard was the big favourite from the French team, he had previously won the Downhill, Slalom and thus the Combined at the Hahnenkamm. Karl Schranz won the Hahnenkamm Giant Slalom.  "But it all turned out differently in the end," mused Hinterseer.

The first medal was won in the Giant Slalom

The Giant Slalom was held on 21st February. The course was set by American Barney McLean. Karl Schranz opened the race with start number 1. Before the games he had told everyone that he would win the Downhill and Giant Slalom, but his nerves got the better of him and he finished seventh. Stiegler was announced as the winner because of wrong timing, but this was corrected after a deliberation period of 18 minutes. He took silver instead. "That was terrible, we all thought Pepi had won gold, but then the correction came," said Leitner. "I was set to race in the Giant Slalom and thought I might be able to make up for lost time, but unfortunately I made a mistake before the finish," said Ernst Hinterseer, who eventually won bronze. Anderl Molterer finished twelfth. Willy Bogner was eliminated in the first run. "At that time the giant slalom had an altitude difference of 553 metres and 55 gates, which is more like today's Super-G," Leitner said thoughtfully. There was also only one run.

On the side-lines for the Downhill

The Downhill took place on the "Squaw Peak" slope one day later. Race day had been postponed due to heavy snowfall. The Downhill was originally scheduled for 19th February. As course setter, Frenchman Juan Vuarnet won ahead of Germany’s Hans-Peter Lanig and Frenchman Guy Périllat. Karl Schranz came seventh, Egon Zimmermann tenth, Pepi Stiegler finished 15th and Anderl Molterer  19th. “I still remember it exactly. We stood at the side-lines on the upper third of the racecourse to watch the Downhill. Schranz was considered favourite. But you could see with your naked eye that Karl was not going to win," reported Hias Leitner.  "It was a beautiful winter’s day," added Hinterseer, whereby both former ski racers often referred to the material advantages of the French.

The Slalom took place on Wednesday, 24th February and the race kicked of early at 9.30 hrs on the "KT-22” slope. A friend of Willy Bogner, Norwegian Stein Eriksen, set the first run with 69 gates, while the second run was flagged out by Swiss Karl Molitor, with 62 gates. The racers’ elimination rate was high, despite excellent weather conditions. This was caused by the two challenging, yet entirely different courses. "Stein Eriksen had set a heavily zigzagging, almost impossibly difficult to negotiate and terrible slalom. The slope was steep," said Hinterseer. 63 participants competed, of which only 40 were left in the rankings by the end of the race. Eliminated athletes included Willy Bogner (best time after the 1st run), Francois Bonlieu (FRA), Willi Forrer (SUI), Ernst Oberaigner (AUT) and Roger Staub (SUI). "I competed with my giant Slalom skis in the Slalom, which were 2.15 metres long. These skis were already equipped with modern edges and I felt more comfortable with them," said Hinterseer.  Ernst Hinterseer, who was actually only a substitute, won the gold medal, followed in second place by Hias Leitner, who took silver. Pepi Stiegler came fifth; Ernst Oberaigner was disqualified.

Handing the flag over to Innsbruck was emotional

"We also watched an ice hockey game, the game between the US team and Russia was truly outstanding. "It was a battle for gold between the two teams, with neither giving anything away. The USA ultimately won. All in all, I have only good memories of the Olympic Games of 1960."  The two legends mentioned that Othmar Schneider was a prudent team captain and good coach. There were no visiting supporters or fans. Both athletes gave it some thought and Hinterseer remembered: "Dr. Alois Lugger was presented with the flag for the 1964 Games in Innsbruck and when the anthem was played, tears ran down his cheeks. It was a very emotional moment, one that almost moved us to tears too. Apart from that, they could only remember the two top sports journalists, Bertl Neumann and Toni Thiel, being in attendance. "It was really nice that I was allowed to carry the Austrian flag at the closing ceremony," said Hinterseer happily.

When asked about his good fortune, Hinterseer said that he didn’t have much until 1960. He had a hard time of it with two serious injuries, one of them almost fatal. Everything improved from that Olympic winter onwards. "I was lucky, had professional success on which I could build and have a lovely family. Moreover, I am healthy! What more could you want? Leitner shares the same spirit: "We were lucky, and our lives went well!"

Hinterseer did not want to live behind Sailer and Molterer

"The welcome reception in Kitzbühel was unforgettable. Ski instructors hoisted us onto their shoulders and carried us into the town, where countless people were waiting," said Hinterseer. The gold medal winner received a building plot from the municipality. "Mayor Hermann Reisch asked me if I wanted to have the plot behind Anderl and Toni, or at Schattberg. I told him that I would like to go to Schattberg, because I have been behind the two of them often enough in the past", alluding with a smile to the fantastic sporting successes of Anderl Molterer and Toni Sailer.

They saw the world without money

Both told about their many adventures, experiences and the time they spent together. They saw the world without money “We have always helped each other, were always good friends. Our success at the 1960 Olympic Games in Squaw Valley 60 years ago had a hugely positive impact on our lives!"

(*Note: as was customary at the time, FIS World Championships medals were awarded simultaneously, including the Alpine Combined, so Ernst came home in fact with four, and Hias with two medals)

The biathlon was an Olympic discipline for the first time in 1960. 30 athletes competed and fired distances of 100 to 200 meters with large calibre rifles. It was a 20-kilometre race.

The games were almost literally “a wash out." Snowfall only commenced on 9 February, ten days before the start of the event.

US athlete Penny Pitou and Ernst were the only athletes to win two medals in these games.

After the flag bearers were welcomed by the Head of Organization, Prentis C. Hale, he handed the podium to the then US Vice President Richard Nixon, who spoke a mere fifteen words, despite travelling 4,300 kilometres to attend the event. Due to heavy snowfall, the presidential convoy needed four hours to cover the 160 km from Sacramento to Squaw Valley, causing the opening ceremony to be delayed by an hour.

A blizzard swept over the stadium during the opening ceremony, after which the sun broke through, as representatives from Cortina d'Ampezzo handed over the Olympic flag.

TV rights were sold exclusively for the first time, with the IOC deciding to sell them to CBS for $ 50,000. CBS had already paid $ 550,000 for the summer games that year.

There were no bobsleigh competitions because the organizers lacked funds and didn't want to build a track for only nine nations.

Women participated in speed skating for the first time.

Another Kitzbühel colleague from the Wonder Team was in attendance. As coach of the German national team, Fritz Huber was able to win three medals with Heidi Biebl (Downhill gold), Hans-Peter Lanig (Downhill silver) and Barbara Henneberger (Slalom bronze).  Willy Bogner was leading in the Slalom after the first run. His parents removed him from the charge of coach Huber and asked Stein Erikson to inspect the course with Willy in private, which led to Bogner's not entirely surprising elimination.

Pepi Salvenmoser was also in Squaw Valley as coach of the Canadian national women's team. He coached, amongst others, Anne Heggtveit, who won gold in the Slalom and Combined. Heggtveit's Canadian hometown Ottawa subsequently awarded Salvenmoser with an honorary citizenship.

The ski area did not even exist a few years before the Olympics. The Walt Disney Group had bought the area with the aim of building a ski resort and wanted to “market" the ski centre with the Olympic Winter Games. The opening and closing ceremony were then planned for the first time in the history of the games by the creative minds of the Disney group, under the personal direction of Walt Disney (5,000 artists performed at the opening ceremony).