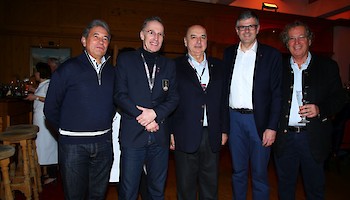 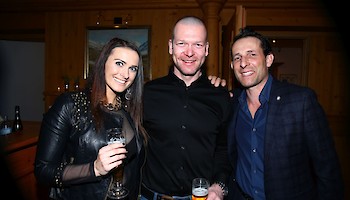 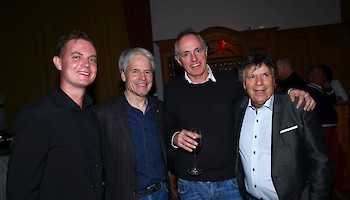 After the legendary Hahnenkamm Downhill and an emotional award ceremony, an invitation was extended to attend the “Hahnenkamm Evening“. It was probably the all-time biggest meeting of ski legends, a tremendous evening filled with memories, whilst still looking towards the future.

As KSC President and OC Chief, Michael Huber, opened the meeting, he was still obviously affected by the emotional roller-coaster of the past few days. Deeply grateful and impressed, he welcomed all those in attendance: “I am unable to mention everyone by name, you are our guests of honour, our sporting legends, you are the people who make the Hahnenkamm Races the highlight of the Ski World Cup!“ ÖSV President, Peter Schröcksnadel, was also overwhelmed by all that HKR Organizing Committee had managed to accomplish over the last few days: “In keeping with the spirit of the sport, the Super-G was held with its start line at the Mausefalle and finish at the European Cup finish line at Oberhausberg. Spectators received the complete programme, only very few manage such an extraordinary accomplishment!“

Two ski racers in particular were honoured during the Hahnenkamm Evening, athletes who have gone down in ski history as two of the all-time greats.

Giovanoli, the “Trimphator“ over the unbeatable Jean-Claude Killy

In 2018, Dumeng Giovanoli was voted “Hahnenkamm - Legend of the year 2018“. The athlete from the Swiss canton of Grisons was overwhelmed by this honour.

The successful racer celebrated his first World Cup victory in the Wengen Slalom on 14th January 1968. Only one week later, he triumphed on the Kitzbühel Ganslernhang Slope, where he relegated Austria’s youngest talent, Alfred Matt, into second place.” It is not skiing that I have missed so much, but rather living out of a suitcase,“ he says in retrospect. Giovanoli was deeply impressed by the HKR organization.” It is the Slalom tomorrow, which I am really looking forward to!“ The man from Sils in Switzerland won the 1970 Giant Slalom at Hahnenkamm and enjoyed a further three Hahnenkamm podium finishes. He took the overall World Cup winner’s title in Giant Slalom in 1968.

A visit by Hahnenkamm legend, Jean-Claude Killy was the greatest honour for Kitzbühel Ski Club, Organizers of the Hahnenkamm Races. Killy has won three Olympic gold and six World Cup gold medals. He participated in Kitzbühel no less than 18 times, winning outright on seven occasions and achieving four additional podium finishes. His Combined victory in 1967 is unforgettable, as he is the only person in the World Cup era to have achieved the perfect score of ”0“. In respect of this incredible achievement, he was voted “Hahnenkamm - Legend of the Year 2017“. Unfortunately, illness prevented him from picking up his award a year ago, so it was presented to him during this honorary evening. “From an international perspective - the Hahnenkamm Races are the number 1 in ski sport“, said the delighted French champion.

Killy had stood only shortly before on the Zielhaus balcony during the grand prize-giving ceremony and was deeply moved as the thousands of spectators applauded him. He was honoured as “Hahnenkamm – Legend of the World Cup Era”. In his acceptance speech, Killy said: ”I have not been back to Kitzbühel since 1968, and it is very special for me to be here. My races in Kitzbühel will remain forever engrained in my memory!“

All in all, it was a very special and commendable evening, with many sporting personalities. You won’t find that anywhere but in Hahnenkamm Town.